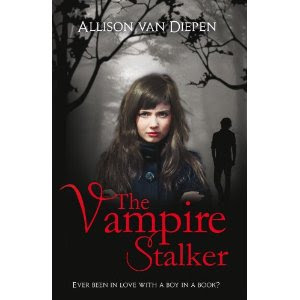 
Ever been love with a boy in a book?
Amy is in love with Alexander Banks. In fact, she's obsessed with him. He's brooding and handsome . He hunts vampires.
He's perfect
.
The only problem is, Alexander doesn't exist. He's a character in a book.
But what if he showed up one day? What if he were somehow real?
Review:

The Vampire Stalker is a every girl who reads paranormal romances dream.

When i first read the synopsis for this book i was thrilled to read it. I mean come on! Doesn't it peak your interest? A boy that you love from a book actually exist! The story starts with Amy in a line for the next book of Otherworld, (the book hat Alexander exists in). Then on the way home Amy is attacked by Vigo (Vigo is the villain) and then Alexander saves her! Amy can't believe it!  When Alexander notices he's in a new Chicago that he has never seen he asks Amy for help and thats where it all wisps off on its own.

Alison, has made the characters in this book believable. From, Amy to the jock squad. When i'm reading the book i really believe that i am in Amy's shoes.

supercalifragilisticexpialidocious
Posted by bookworm105 at 10:25