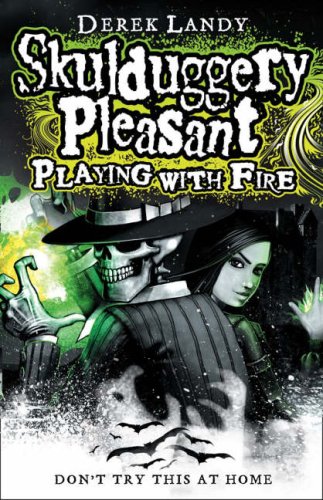 Don't try this at home.

You know how it is-you think you've saved the world, and then ANOTHER evil villan turns up with an unbeatable monster and starts breaking things.
Oh, yes, and you've got a skull for a head. A thirteen-year-old girl for a side kick. And no clue what to do...

*SPOILERS!!! SPOILERS!!! This review contains spoilers for people who have not read the book.


Valkyrie Cain, a sidekick to a detective, Skulduggery Pleasant; a living person...well if you don't count that he is only made up of bones. Now that Valkyrie has defeated Serpine and saved the Sanctuary. But now that's done theres a new villain.

The short story: Valkrie and Skulduggery needs to defeat Baron Vengeous and stop the unbeatable monster; which has a part of the faceless ones.

Skulduggery Pleasant is a funny, calm and loving character. He makes jokes, with sarcasm and he's always calm and whemn i mean always it means always. The originality of his character is great. I would love to meet him in real life. His character is also mysterious, because we don't know much about his past and he seems to know everybody.

To sum it all up i think that Playing with fire is an amazing, action packed and hooking book.