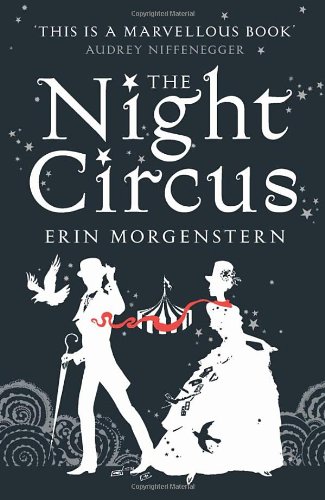 Summary:
The circus arrives without warning. No announcements are made...
It is simply there, when yesterday it wasn't.
In 1886, a mysterious traveling circus becomes an night constructed entirely in black and white, Le Cirque des rives delights all who walks its circular paths and warm themselves at its bonfire.
Although there are acrobats, fortune-tellers and contoritionists, the Circus of Dreams is no conventional spectacle. Some tents contain clouds, some ice. The circus seems almost to cast a spell over its afictionados, who call themselves the revers-the dreamers.
At the heart of the story is the tangled relationship between two young magicians, Celia, the enchanter's daughter, and Macro, the soccer's apprentice. At he behest of their shadowy masters they ind themselves locked in  a deadly contest, forced to test the very limits of the imagination, and of their love...
Review:
Th Night Circus is one of the best books I have read in 2011. It's full of magic...Well, that is what it's suppose to be about.

This book is hard to follow with all the dates and names. For example, you don't know why Bailey is in the story, but it makes it sense in the end. I was surprised that Bailey is going to get the circus.