Review: The curious incident of the dog in the night time by Mark Haddon. 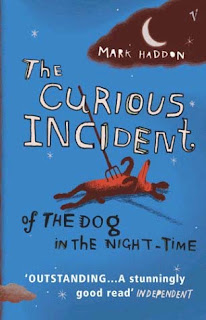 The curious incident of the dog in the night - time is a murder mystery novel like no other. The detective, and narrator is Christopher Boone. Christopher is fifteen and has Asperger's Syndrome. He knows a great deal about maths and very little about human beings. He loves lists, patterns and the truth. He hates the colours yellow and brown and being touched. He has never gone further than the end of the road on his own, but when he finds a neighbour's dog murdered he sets out on a terrifying journey which will turn his world upside down.


I am still taking the story into my system and i can't think anything else than that this book is brilliant. Just brilliant!


Christopher is a normal boy - well not really - he's writing this book himself. It starts with the dog. The dog is call Wellington and Wellington belongs to Miss shears. But when christopher starts to investigate Wellington's murder he finds out that his mother is . . . not dead but lives in London.


I'll say this again: THIS BOOK IS BRILLIANT!!!
And talk about the cover it just catches your eyes!


And the plot itself and how it's laid out is just unique. The chapters numbers are not in order but in prime numbers (in order) because as you know Christopher loves maths. Plus, the way that the author has wrote the book doesn't even sound as if he is writing. To me it just sounds as if christopher is writing it. I think Mark (the author) has made it easy to understand Christopher as if he is a real person and not made up because in the book it says exactly what Christopher feels like. In addition to that you can see what Christopher sees  because of the pictures and diagrams.

One of the most brilliant book in the world. Read it if you haven't because you really don't want to miss this book for anything.

Email ThisBlogThis!Share to TwitterShare to FacebookShare to Pinterest
Labels: Best book in the world, Reviews.